When hiking, I am often dismayed (but not surprised) at finding poop bags* along the trail.  Apparently, people pick up after their pets, bag the poo.... only to leave it behind.

(*I am sure these bags contain anteater poop as no dog owner would ever do anything like this!) 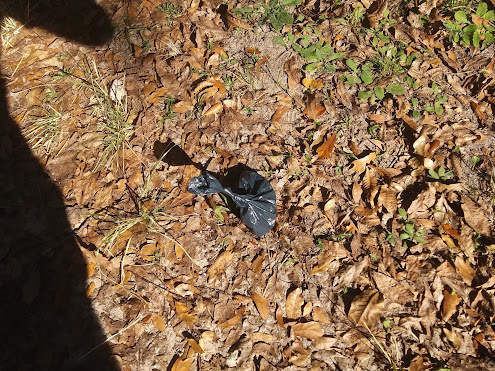 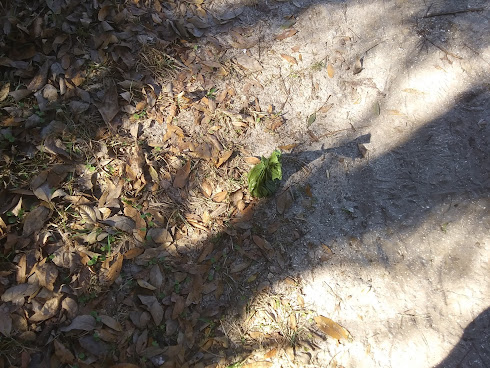 This is by no means the worst I have seen:  Trails on many properties are literally lined with poop bags!  Um, what exactly is the point of picking up the poo to simply put it back down again?   Who do you think is going to pick up these bags?
Still had a nice hike, though.  Florida Hiking: 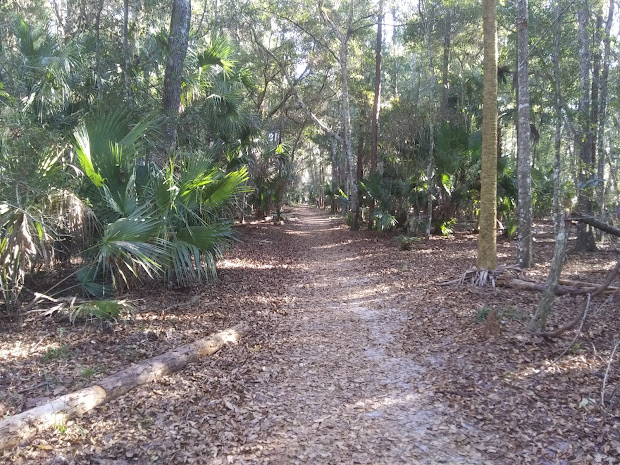 Saw some wild hog damage on the hike, consider: 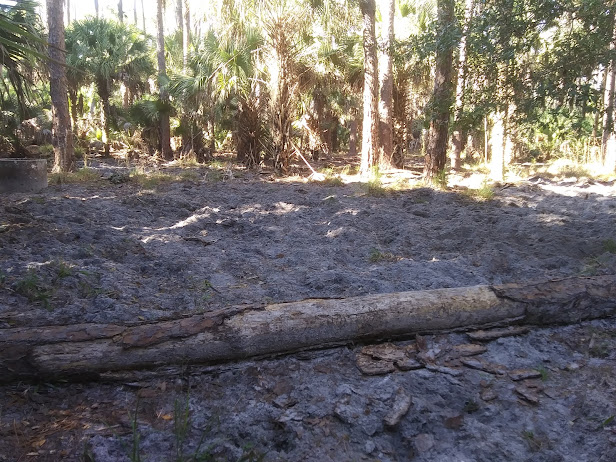 Notice how the forest floor is completely torn up in the above photo?  FERAL HOGS!
Enjoy the rest of your weekend!

Posted by Animal Uncontrol at 6:00 AM No comments:

Email ThisBlogThis!Share to TwitterShare to FacebookShare to Pinterest
Labels: Miscellaneous

Dog lovers always deflect.   When a dog mauls or kills, they say "don't blame the dog" because the dog is a not a moral agent (moral agency requires a certain level of intelligence that dogs lack).  They say this because they do NOT want the dog put down under any circumstances.  Should dogs that maul and kill be summarily put down?  Unqualified YES!

But, didn't I just say the dog can't really be held accountable for what it did?  Indeed, it isn't:  Summary destruction of all dogs that maul and kill is strictly an exercise in risk mitigation.   It has nothing to do with accountability.

As an allegory, lets consider an event that occurred outside of the Animal Uncontrol universe.

June, 2021:   The Champlain Condo tower in Surfside Florida partially collapsed.  The building was roughly "L" shaped, and the arm of the "L" perpendicular to the beach went down.  The incident is still being investigated, and the apparent cause is a variety of factors.

Champlain Towers immediately after the collapse: 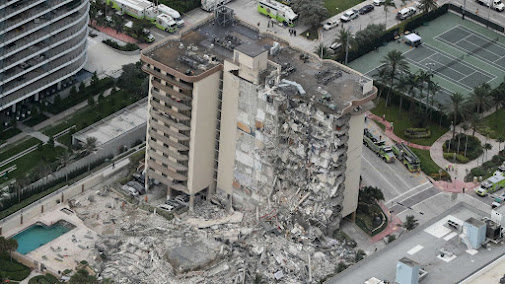 What is interesting to us in the above case is, soon after the initial collapse, authorities ordered the demolition (destruction) of the still-standing portion of the building.   Why would they do that?   Similar to a dog, a building is not a moral agent - it doesn't know what its doing.    Were these authorities thinking "We will hold that building responsible!  We will show it a thing or two!!!   Let this set an example for the rest of those buildings!"  No, that is not why they brought it down.

The remaining portion of the Champlain Towers structure was demolished strictly as a risk mitigation measure.  The remaining structure was clearly unstable and unsafe and was brought down before it could cause any more problems.   What problems?  Well, while not 100% sure it would collapse on its own, there would be no way to be sure when it would collapse or in what way:  It could collapse into a neighboring building or into the street, for example.  Furthermore, such things create an "attractive nuisance" whereby homeless people would try to squat in it and teenagers would force entry in search of a good place to party.

So, the remaining portion of the Champlain Towers was brought down in an orderly and controlled manner to mitigate the risk it posed.

So, with that said, any dog that fails its real-world temperament test (the only test that means squat) must be summarily put down as a risk mitigation measure.  It has nothing to do with holding the dog accountable (though you can believe that if you want to, whatever).

Enjoy the rest of your weekend! 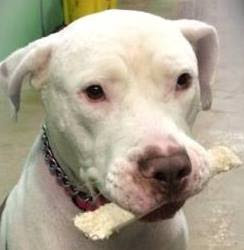 I am back for real, not fiction,
I’ll cure YOU of your air addiction!
Your self defense efforts a fail,
Hurt me, You’ll spend your life in jail!
I will most certainly get a pass,
When I bite a chunk out of your ass!
I will invade your space,
And make a meal of your face!
From your screaming, please refrain,
As I crack open your skull, suck out your brain!
Some folks say, BSL the Answer,
I say, I’ll kill more men than cancer!
So, Get down on your knees, you putz,
You serve no purpose but to worship MUTTS!
P.S.  Mick is dead ❤
Posted by Animal Uncontrol at 12:49 PM No comments:

Every Fourth of July and New Years Eve, social media sites explode with the following entreaties:  PLEASE NO FIREWORKS!  THEY UPSET MY DOG!

Here is an article on the matter.

It takes one hell of a lot of CHUTZPAH for a bunch of dog owners to tell the rest of us to KEEP IT DOWN.   What, NOW noise pollution is a problem?   I thought everybody had to "Just get used to it"?  Look, you keep telling me your poodle is smarter than my honor student, shouldn't Fido understand this is strictly celebratory and not a war?

Look, if they (dog owners) get to tone me up 24/7/365, why can't I tone it up a couple days a year?  Oh, wait.... DOGGY DOUBLE STANDARD!  Their entitlement status empowers them to do to us what we would NEVER be allowed to do to them.  Listen up good you proles!  Put your earplugs back in and get your asses back to the salt mines!   Dog owners tell you what to do, not the other way around!

I think its time to give the barking dog bingo game a bump.  Enjoy!

Posted by Animal Uncontrol at 5:30 AM 2 comments:

Email ThisBlogThis!Share to TwitterShare to FacebookShare to Pinterest
Labels: Barking

Dog cultists are now suffering under the “Total Dog Solution” that they themselves have created.   They want to blame “Pit Nutters”, but the regime they created has now gone insane and is consuming its own.   Ready to take responsibility, yet?

One of the leading causes of death in the 20th century was “Democide”, i.e. a government exterminating its own people.   Good examples of this are Hitler’s Germany and Pol Pot’s Cambodia.  Communism and Nazism are good examples of a “Total State Solution” where everything is run by and for the government, and that government and its agents can have no restraint placed on its behavior whatsoever.  An explosion of death and violence are the inevitable result of such a regime.

Dog worshipers have created a policy environment where dogs and dog owners must never have any restraint place upon them, whatsoever.  Everything Fido does, by definition, is absolutely good and just because Fido did it.  Period, end of conversation.  They have successfully implemented The Total Dog Solution.

Pit Nutters are the equivalent of the Black SS or the Khmer Rouge, projecting violence and intimidation against everyone in the name of the almighty Dog.   Remember, they are dog owners, too and can’t be restrained in any way.  Anything done in the name of Dog is by definition great and wonderful.  They are the true enforcers of the Total Dog Solution.

Some argue if we get rid of pit bulls, we can go back to normal.  Nice try, but won’t work as something resembling the pit bull apocalypse is the INEVITABLE outcome of the Total Dog Solution.  As long as dogs and their owners are placed above the rules of good behavior, the problem will not only continue but will get worse.   Pit Nuttery is merely a symptom of the Total Dog Solution.

Pursuant to the above, one common outcome of a “Total State Solution” is the liquidation of “useful idiots”:  Essentially, morons that promote the revolution and are subsequently eliminated when they are no longer useful.   Lovers of non-pit dogs are the “useful idiots” in the Total Dog Solution scenario:  You and Fluffy got shredded by Pits because the worst among you no longer have a use for you.

Have a great evening!

Posted by Animal Uncontrol at 10:03 AM 2 comments:

Self defense my ass or "he was just doing his job"

Left a comment on Dogsbite.org today.  Apparently, a woman was killed when breaking into her own home by the 4 mutts occupying the residence.

This is the primary reason that lethal booby-traps are illegal as hell everywhere.  Even your hard-core survivalist types refuse to use them.  Why?   They frequently result in a "hoist with your own petard" type outcome where the "booby" turns out to be the very person that laid the trap.

However, this again reveals the insane doggy double standard:  Lethal booby traps are perfectly fine and acceptable when the booby trap in question is a DOG(s).

"Self defense?".  Anyone arguing self defense in a case like this needs to be told to go find a tall building and jump off it.  Dogs do NOT have the same rights as people, and a dog does not have a right to defend itself against a human being in ANY scenario.  When and where is is appropriate to use force against a human being is a right reserved for HUMAN BEINGS, period.

Take careful note of what I wrote above:  Your dog should NOT be allowed to attack anyone, anywhere for any reason.  I used to be tempted to give a pass if someone was threatening or tormenting the animal, but dog fanatics have repeatedly demonstrated they are unable to reason and insist that any and all violence committed by dogs is absolutely, 100% acceptable.  So, screw them.

Posted by Animal Uncontrol at 7:22 AM No comments: