Another in this series.

One thing that I, and indeed many people, find infuriating about this regime is that nothing gets attention until someone is killed.   The Roy McSweeney, Klonda Richey, Jordyn Arndt, etc.. etc... ad nauseum scenarios were all preceded by months, sometimes years, of atrocious, barbaric behavior on the part of dogs and their owners for which there was no intervention.

Remember, Fido has been granted absolute moral authority.   Whatever Dog does is well and good because... Dog is doing it!   If a jogger gets attacked, or the UPS guy winds up in the hospital.... no shits given.  The victim is held accountable and everything is just peachy in Dogville!

Over 4 MILLION Americans are bitten by dogs each year, with about 400,000 of those requiring hospital emergency room visits.  Where is the outrage at that?  NONE ... because we are conditioned to love Fido no matter what.  Again, Fido has Moral Authority!   Extending that to a few dozen killed, well.... that is just statistical noise.   Don't you think that Fido, in His infinite wisdom, may see fit to take the lives of a few useless 2-leggers each year?   Who are we mere mortals to challenge the wisdom of Dog?

Of course, some folks are going to argue that "there is a big difference between a bite and a mauling".    Where do you draw the precise line between a bite and a mauling?   Why is it that bites are perfectly OK, but maulings are not?   Why are "maulings" of huge societal import but "bites" are irrelevant?   Is not the level of accountability the same in either case?

Lets consider this analogy:   You get drunk, drive, run a red light and hit my car.  That crash (I won't call it an accident) was your fault.  You are responsible.   Now, the results of the crash could be anything from a minor fender-bender to me winding up in the morgue, but the precise outcome is not really relevant to who owns that outcome.  Again, you are at fault.  You made it happen.   Its not like you just get to say "Hey, the damages were only a few grand.... I'll take my keys and go home now".   NO.  That is not the way it works!

Pursuant to that, dog owners own those 400,000 emergency room visits.   When a GSD runs into the street and attacks a jogger, the dog owner owns that scenario.   Again, accountability does not vary according to outcome:  If its your dog, its your problem.

Another in this series.

'Twas another DBRF in Miami last month.  Hey, aren't Pits BANNED in Miami?  Didn't the Miami electorate vote to uphold that BAN by an overwhelming margin?   In a recent comment section, I did a back of the envelope computation and came to the conclusion that Pit Bull related homicides are more likely in pit bull "free" Miami than the nation at large.  Why is that?

Lets check out Miami-Dade's Animal Services pets of the week.

Cici is a 1-year-old Brindle Terrier mix in search of a loving forever companion that will shower her with lots of hugs and kisses. Connect, adopt and fall in love with Cici at Miami-Dade Animal Services. 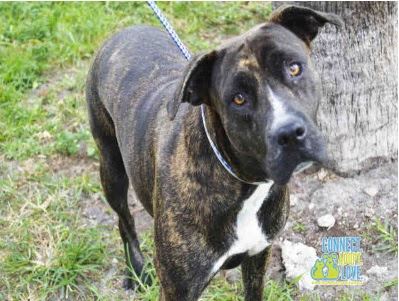 [EDIT:  It appears Miami-Dade Animal Services has updated the page and the photo has changed.  I have re-posted CICI's photo]

See, there is the answer to the Pit Bull problem right there:  Simply call them all something else and Voila!   No more Pit Bulls!

The hideous beast depicted above literally screams "PIT BULL!!!" yet a city agency is GIVING THEM AWAY in defiance of local law.   This isn't the first time this has happened, either:  I have written about this problem previously.  And, the cheeky SOB's are doing it right out in the open!   Typical dog worshipers, giving the proverbial middle finger to everybody!

This is what happens when your ass is in front of your head.  That little piece of paper may say that there are no pit bulls allowed within city limits, but with the dog culture in full force you'd have a better chance of enforcing a ban on Catholicism at the Vatican.

Did you BSL folks really think you could just pass this law and walk away?

While the electorate appears to favor some controls, nothing is accomplished because city agencies and other authorities are staffed with dog worshipers, animal rights nutters, and various other miscreants with an interest in maintaining the dog owning overclass.   These foul degenerates will do everything they can to make sure that any laws that are passed are NOT enforced.  This goes for biting, barking, dog at large and YES breed restrictions!

Always consider the Ten Commandments!  Any breed restriction is a violation of just about all of them.  When you have an enforcement apparatus loaded with dog cultists, you can pretty much count on any "anti-dog" statutes being ignored.   Hell, I would not be surprised if reporting an illegal pit in Miami got you arrested for harassment!  How dare you critique the almighty dog!   Fido is a "Lab Mix" and how dare you say otherwise!

Consider the root word of "enFORCEment".  All policy reduces to the use of force at some point.  No animal rights cultist or dog fanatic is going to use force against a dog or an owner.   These types need to be purged, with extreme prejudice, from ALL positions of authority.

While the above proposition seems rather harsh, its the only path to improvement.  Anyone who adheres to criminal ideologies, i.e. Animal Rightism, Dog Worship, Dog Fighting, etc... etc... must be terminated from ANY and ALL positions of authority.  You wouldn't hire a NAMBLA activist to be a child care director, would you?  While people have freedom of speech and expression, WE THE PEOPLE have a right to choose who enFORCEs our animal control statutes.  These degenerates need to take their poisonous ideologies and hit the road!   This conflict of interest cannot be allowed to continue.

What time is it?

2015 was a GREAT year for Fido.  A pit bull kills another in Miami... where they are banned!  Indeed, the city is giving away banned pit bulls!  How much better can it get?

On a related note, we now have the first "suicide by dog" in history!   "O cruel world!  I must depart this mortal coil!  I must ignore all those nasty knives, firearms, pills, large bodies of water and tall buildings!  I will end my live by.... diving into a backyard full of pit bulls(?)"  Maybe its just me, but this seems a little far fetched to me.   Perhaps the "official" outcome was, ahem, "influenced" by the fact that a local cop owned the property in question?   This is shaping up to be a major scandal.

And, of course, we have the 9 year old boy living in a small travel trailer killed by his sister's 3 pit bulls.  Again, (and again, and again...) a pack of large dogs in a small camper is SUCH a good idea, isn't it?   The sister may go to jail, and yadda, yadda, yadda... but nothing ever really changes, now does it?

[EDIT]  Here is a video of Griffin-Heady's pit bulls.  You know, the dogs that killed her brother?  Get it while the getting is good... probably won't be on youtube for long: