That would be a silver lining for DOGS, not YOU... Peons!  What the hell were you thinking??

As per my last post, Mickey's original owner has been revealed!  The individual that abused and neglected St. Mick SOOOOO terribly that the Mick had no choice but to chow down on a four year old (who supposedly deserved to be eaten regardless, but who can keep track of those goalposts anyway?).  In any case, according to the foamers, we are talking about abuse so horrible, so unspeakable, it would make a Spanish Inquisitor immediately turn green and die from the sheer horror of it all!  O The Dogmanity!

Consider this pic from WMBC:

This is where Mickey use to live.

No green grass, not trees, no shade. Basically a sweat lodge, were he suffered, and was abused.

Mickey has come a long way since then. 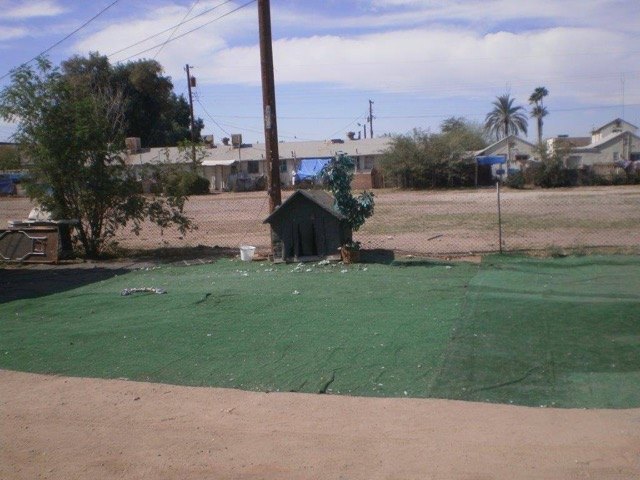 Predictably, the WMBC commenters did not disappoint: 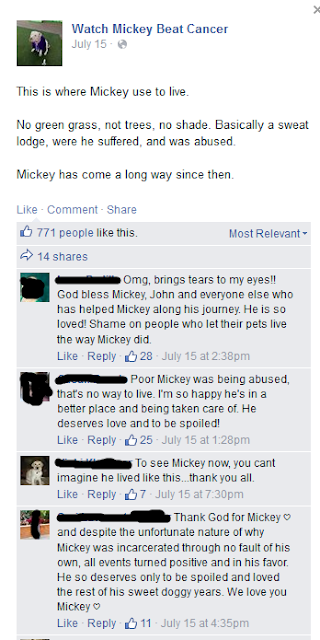 And, so forth.  Its tough to keep track of all the conflicting narratives.  Among them:

- Mick is completely innocent, yet being incarcerated was good for him.  So, shouldn't they be THANKING Kevin, the family, and the babysitter?  Hell, all this goodness could not have happened without them, right??   If it weren't for criminal mastermind Kevin "bone-jacker" Vicente, Mick would still be living in those HORRID conditions!

- Their "proof" that Mick was so horribly abused was... he lived outside in a doghouse.   Wouldn't that apply to ANY outdoor dog?  Where is the crusade to end outdoor tethering?   Again, shouldn't they be glad that Mick was IN the jail?   At least he wasn't outside where there are evil human children constantly trying to steal his food and toys.

- No green grass, not trees, no shade.  I have been to the Phoenix area several times.  This description fits the entire area.  IT IS A DESERT, FOOLS!   They are implying that the owner tore up all the grass and cut down all the trees for the primary purpose of making Dear Mick suffer.  Perhaps they should just BAN dog ownership in the entire US Southwest?

Reading the comments, there is a narrative that is conspicuously absent.  With the exception of a one-time comment by Schill, you NEVER hear the Mick horde apply any blame to the owner.   They make it sound like Mick's living conditions were something that just happened, that Mick just wound up in the doghouse by magic and was abused by.... whom??   Where is the vitriol aimed at THAT person?   Now, I don't read ALL of the comments, but enough to get the gist of the narrative.

The unspoken part of their narrative is that dog owners are ALL as pure as the driven snow, just like the animals they keep!  More bait and switch.  In the abstract, the foamers blame it on abuse/neglect/training, BUT when something actually happens, and / or if you actually must apply blame - put ALL of the blame on the victim, or at least someone else besides the dog and the owner.

You'd think, given that they are infatuated with this dog, they would harbor at least some vitriol for the person that set Mick up to fail.  Hey geniuses - WHO put Mick in that doghouse with no trees, no green grass, no iPads and no cable TV?  Who was it who abused him?  WHERE is the resentment aimed in THAT direction?  Nope, they gotta hate on the victim, his family, and all us critics.... it was all OUR fault!

And, there is the reason these problems roll on.  60 years of the dogocracy have seen to it that no dog or owner is held accountable for anything, ever.   Obviously, because its ALWAYS someone else who made a mistake, deliberately did the wrong thing, or needs to change.  And, it doesn't matter what the complaint is.  Dog owners NEVER do wrong, never need to modify their behavior, or do so much as lift a finger.  They are the epitome of absolute perfection!   Its the REST of us that need to change!

Posted by Animal Uncontrol at 7:14 AM 39 comments:

Email ThisBlogThis!Share to TwitterShare to FacebookShare to Pinterest
Labels: Mickey 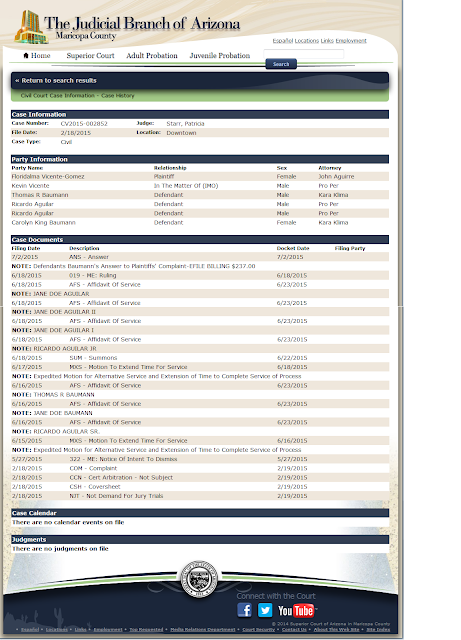 Very little mention of this, even on the anti-Mick sites.  Should be very interesting!

Here is the link to the case info.  Case details, such as the pleadings, are not available.  Might be able to find them with more digging.
Posted by Animal Uncontrol at 9:09 AM 23 comments:

I just can't seem to get the following song out of my head these days.... I wonder why that is?


I have no idea.  In any case, a few interesting developments on the MICKEY front!

It appears there was some dissention within the Mickey Inner Party.   A voice mail message from John Schill to Annie Duddy (both part of the inner sanctum) during January went as follows:

"Annie I'ma having to delete your posts and if you continue to post Mickey is not there I'm gonna have to ban from Save Mickey. You cannot say he is not at MASH. That is not your pwace and you should never do so. Mickey cannot leave Mash. The only reason it is because I'm involved. You can't do it. Mickey cannot be known to be not at MASH. Why would you post like that? Who are you to post like that? You can't post that."

Extra consideration to the phrase Mickey cannot be known to be not at MASH.  Indeed, because that would have been a violation of a COURT ORDER.   Again, note this was back in JANUARY, and Mick was not released to his new digs until May.   This is consistent with the "Mickey Cam" being down for days at a time.  It would be no surprise that these "glitches" were intentional and the Mauler was released from confinement during those times.  Obviously, I cannot prove that but the theory is very plausible.

Much to the consternation of Mick's rank and file (proles), the WMBC page has devolved into a spam page for "save this biter" or "prayers for that mauler" and the like. Very little info on the Saint himself.  The "Proles" of the Save Mickey movement had been more or less abandoned.  And, why not?  The big shots got what they wanted:

- Mauler is spared.
- Mauler is free from the jail.
- They have the legal precedent they need to save more maulers.

So, who cares about all of that filthy rabble?  The useful idiots are no longer useful and they get dumped at the curb... its all good!  Well, until they are needed AGAIN but I'm sure their overriding, irrational love of all dogs will get them to support the next "save this killer dog" type cause!

There is something to be learned here:  Dog lovers take Heed!  Getting involved with any of these AR creeps is NOT going to make your life better.  They will take your money and your time and leave you holding the bag.  Consider that they care for nothing but dogs and themselves - its obvious they put zero value on the lives, rights and interests of other human beings.  They have nothing but contempt for you.  To them, you are nothing but a commodity to be consumed!

The Mick Cam was never re-activated at the new location, arguably due to the Mick Foamer's theory the place would be immediately stormed and overrun by a phalanx of Mickey Haters armed with machine guns, rocket launchers, and flame throwers.   However, the theory amongst the more rational is that a new Mick Cam would reveal that the mauler is not being housed in a manner consistent with the court order.... i.e. a suburban living room or the like with frequent breaks to walk the neighborhood. 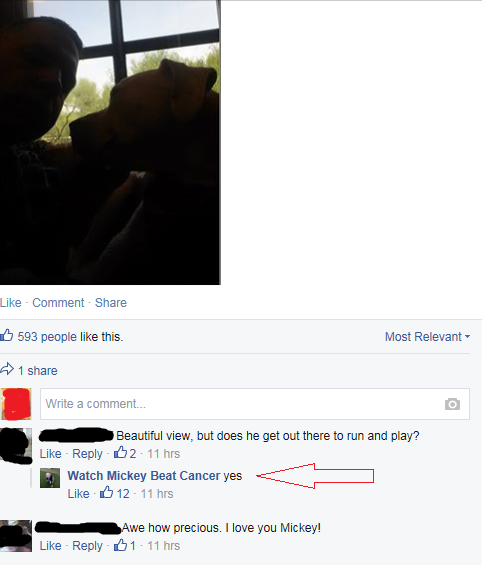 ﻿
Is that window some sort of unbreakable Plexiglas?  What sort of door is on that "room"?  Mick's digs at MASH indicated that he was not going to escape to maul anybody.  His home was a cell of concrete and steel designed to harbor human prisoners. WHERE is he running and playing?

We the people have a right to some transparency in this matter.  Ideally, every dog that mauls and kills would be summarily put down, this relieving us of the burden of harboring known dangerous animals in our communities.

That said, if its imperative (for some arcane reason) to spare these beasts then we have a right to a FULL ACCOUNTING of where the damn thing is every minute of every day!   How the hell does a DOG that tears up a CHILD have a right to this sort of privacy?   What should we call this....?

THE WITLESS PROTECTION PROGRAM!
﻿
Posted by Animal Uncontrol at 6:36 AM 22 comments:

Email ThisBlogThis!Share to TwitterShare to FacebookShare to Pinterest
Labels: Mickey

The Good, the Bad, and the Ugly

Back from vacation.   Took my RV to a large National Forest Campground in the Appalachians.

Had a good time.

Being who I am, I observed many fellow campers with DOGS.  In a relatively small area in a relatively short period of time I was able to observe the full spectrum of dog ownership.

Lets start with the good.  Some folks in a class C motorhome had a Rough Collie (i.e. "Lassie") that was one of the best behaved dogs I had ever observed.  I am talking impeccable manners here.   The dog lay out in front of it's "home", casually people watching, calmly observing the goings on around it.  Not the smallest hint of hysteria or aggression. It made NO noise.  Why can't all dogs be like this?  Obviously, I do not know the full story - it may have been loaded up on valium for all I know.

Now, moving on to the ugly.  There were a couple of archetypes indicated here:

The aggression projector.  Every neighborhood has at least one of these and there were two of them in the area in question.  Again, I lucked out that neither was near me.  In any case, this was characterized as a Pit Bull/mix chained up near the front of the site.  It would frequently charge to the extent of the chain, growling and barking furiously at anyone who came near.   Again, this behavior would not have been tolerated in my state and both of these should have been thrown out as well.  In addition to the noise, if either of these dogs had broken restraint, someone would have wound up in the hospital.   It was obvious that both of these dogs were "game" and wanted to attack something.

Read the pet camping rules in force in Florida State parks.  If they are going to allow pets, this is the right way to do it.

From the link above "Pets that are noisy, vicious, dangerous, disturbing or intimidating to other persons or pets, or which damage park resources, are considered to be nuisances and will not be permitted to remain in the park."

Get that, NC Forest Service?   Do it right!